Sisters of the Most Holy Trinity

Information about the Sisters of the Most Holy Trinity


Some history of the Order of the Most Holy Trinity

St. John of Matha was born of noble parents in Province, France. Educated at

Aix, then lived as a hermit at Faucon. Doctorate in theology at Paris. Ordained in 1197. At the first Mass he celebrated, he had a vision of an angel, clothed in white with a red and blue cross on his breast. The angel placed his hands on the heads of two slaves, who knelt beside him. Later, when sitting beside a stream with fellow hermit Saint Felix of Valois, the two were given the vision of a white stag between whose antlers was suspended a blue and red cross. With the encouragement of Pope Innocent III, he founded the Hospitaler Order of the Most Holy Trinity and of Captives (Trinitarians; Redemptionists) to ransom Christian prisoners of the Moors (the Mathurins); it received papal approval in 1209. The angel's clothing became the habit of the order, the Scapular of the Most Holy Trinity was instituted, the Order was placed under the protection of Mary under the title of Our Lady of Good Remedy, and John was the first superior general. Hundreds of prisoners were ransomed and returned to their homes.


More about the Trinitarian Order.


Order of the Most Holy Trinity in the United States

Mother Maria Teresa Cucchiari, foundress of the Sisters of the Most Holy Trinity.


"In 1198 John of Matha was inspired to found a community dedicated to the Trinity in order to share the Trinity's love through redemptive charity. On September 8, 1762, Maria Teresa Cucchiari followed her own special call by the Trinity and received the Trinitarian habit and became the foundress of the female branch of the Order of the Most Holy Trinity.Maria Teresa and the first two women to join her carried out the charism of the Order, namely, redemptive charity. They were of service to women and children living in the small towns of the hills of Avezzano, Italy in various ways. This was a truly unique and innovative type of ministry for its time. Over the years this ministry included not only catechesis, but developed into caring for children in orphanages, helping the sick and establishing schools for those who otherwise would not have access to education. Mother Maria Teresa had a great devotion to Jesus in the Blessed Sacrament. She had complete trust in the providence of God. When she found herself in difficulty her motto became, "I trust in God and I am confident."


Our Lady of Good Remedy 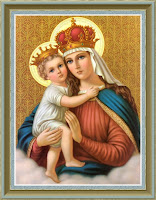 800 years ago Christians were being captured and sold into slavery by the thousands, and nobody knew what to do about it. Then, in the year 1198, a man had an idea. St. John of Matha founded the Trinitarians to go to the slave markets, buy the Christian slaves and set them free. To carry out this plan, the Trinitarians needed large amounts of money. So, they placed their fund-raising efforts under the patronage of Mary. They were so successful at that, over the centuries, the Trinitarians were able to free thousands and thousands of people and to return them safely home. In gratitude for her miraculous assistance, St. John of Matha honored Mary with the title of "Our Lady of Good Remedy." Devotion to Mary under this ancient title is widely known in Europe and Latin America, and the Church celebrates her feast day on October 8. Our Lady of Good Remedy is often depicted as the Virgin Mary handing a bag of money to St. John of Matha.


Habit: The habit of the Sisters is of white wool bearing the emblem of a blue and red cross, signifying the purity of the Father, the sufferings of the Son, and the charity of the Holy Ghost.

And we'll be praying for you, too!

Liturgy of the Hours

The Sacrament of Penance & Reconciliation

Our Lady of Lourdes