Symbols of the Sacrament of Penance & Reconciliation 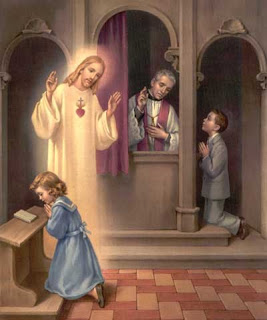 The Sacrament of Penance and Reconciliation is a Sacrament of healing and forgiveness. Through the Sacrament, the penitent receives forgiveness from God for the offenses committed against God and the community. Through this Sacrament, the penitent is resurrected from a spiritual death. St. Maximilian Kolbe said that our lives are meaningless without God; that it is only by dying to ourselves that we may live eternally. For this Sacrament to truly achieve its purpose, it must be an integral part of our lives and bring us into a deeper and more fervent love and service of God and neighbor.

The action of the penitent is a symbol of forgiveness and reconciliation and is attributed to God's grace. Approaching the Sacrament with contrition and repentance, resolving to sin no more, takes place within the context of an awareness of God's love. The penitent trusts in God's mercy, compassion, healing, and forgiveness. Contrition and conversion draw the penitent nearer to the holiness of God, into a deeper intimacy with God, and a rediscovering of one’s true identity as a child of God. Reconciliation is a symbol of life - dying to sin and rising to new life.

The sacrament of Reconciliation is an action that is symbolic. Its aim is to reconcile sinners to God and the community of believers (the Church – the Body of Christ). It is a gift from a merciful God to humanity in order to reconcile the world to Himself. God is actively reconciling in the Sacrament. Reconciliation is the symbol of God and the Church who are mutually related.

The major symbols in the Church for the Sacrament of Penance and Reconciliation are: Keys, Purple Stole, Raised Hand, Sign of the Cross, and a Scourging Whip. 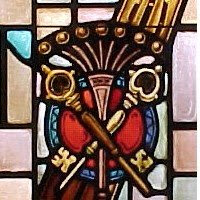 Keys. Keys crisscrossed in the shape of an “X” are the most common symbol for the Sacrament of Reconciliation. The symbol originates with Jesus’ words to Peter, “I will give you the keys to the kingdom of heaven. Whatever you bind on earth shall be bound in Heaven, and whatever you loose on earth shall be loosed in heaven” (Matthew 16:19), by which He established the Sacrament of Reconciliation and gave the Church the authority to forgive sins (see also John 20:21-23: ‘Receive the Holy Spirit. Whose sins you forgive are forgiven them, and whose sins you retain are retained’). 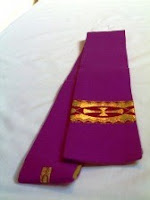 Stole. The stole is the primary symbol of the ordained priesthood. It is the priest in persona Christi, as a representative of Christ who grants Sacramental absolution. Christ is the High Priest behind the priest. A stole is a long, narrow strip of cloth worn over the shoulders, which hangs in front in equal lengths on the right and left sides. The stole signifies the priest’s authority to preside over the Sacraments in general, and his authority to absolve sins in particular. When a priest hears confessions, he wears a purple stole, which symbolizes repentance and sorrow. 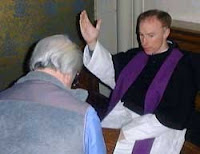 A Raised Hand. During the Sacrament of Reconciliation, after the penitent makes the Act of Contrition, the priest offers the Prayer of Absolution, the blessing that removes the person’s sins, and as he does so he extends his right hand over the penitent’s head. 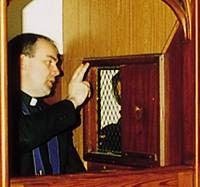 Sign of The Cross. The priest makes a Sign of the Cross over the penitent as he recites the final words of the Prayer of Absolution, “And I absolve you from all your sins in the name of the Father, and of the Son, and of the Holy Spirit.” Jesus “himself bore our sins in his body upon the Cross” (1 Peter 2:24a). Jesus has reconciled all things through himself, and he has made peace by the blood of his Cross (Colossians 1:20). 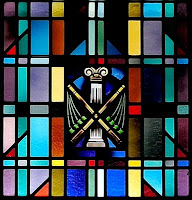 Scourging Whip. Before Jesus, our Suffering Servant, was crucified, He was scourged at the pillar. “He was crushed for our sins, by His stripes we were healed; through His suffering, my Servant shall justify many, and their guilt He shall bear; He shall take away the sins of many, and win pardon for their offenses” (Isaiah 53:5,11,12). The apostle Peter reflected, “By his [Jesus’] wounds we were healed” (1 Peter 2:24).


Other symbols of the Sacrament

Parable of the Lost Sheep. "What man among you having a hundred sheep and losing one of them would not leave the ninety-nine in the desert and go after the lost one until he finds it? And when he does find it, he sets it on his shoulders with great joy and, upon his arrival home, he calls together his friends and neighbors and says to them, 'Rejoice with me because I have found my lost sheep.' I tell you, in just the same way there will be more joy in heaven over one sinner who repents than over ninety-nine righteous people who have no need of repentance.” (Luke 15: 4-7)

The shepherd was not confident that he would find the lost sheep. But having found it, the lost sheep was then eternally secure. There was no effort on the part of the sheep to return to the flock; it was the Shepherd who carried the sheep back home. He did not simply lead the sheep back to the flock or give it directions on how to find the flock; he picked it up and carried it on his shoulders. In returning to the flock, these lost ones had not taken a single step of themselves. It seems they made no effort at all in repenting, yet they did repent. In repenting, the shepherd did all the work in them to bring them back and ensure their safety.

Rose. The rose is a symbol for many things in Christianity (Mary, Mystery, Paradise, martyrdom), the seal of the Confessional among them. The ancient Romans believed that Cupid, the Roman god of love, gave a rose to Harpocrates as a bribe for not letting on what his mother Venus, the goddess of love, was up to. Hence, the rose became a symbol of confidentiality. This symbolism carried over into Christianty, and the doors of Confessionals are sometimes decorated with the rose. From these Roman and Christian associations comes the phrase "sub rosa" or “under the rose," meaning secretly or confidentially.

Parable of the Lost Son. ‘…Father, I have sinned against heaven,

This again speaks of God's merciful and compassionate reaction to the repentant sinner. What is unique about the Parable of the Lost Son is that it focuses more on the process of repentance. Unlike the Parable of the Lost Sheep, the father in this parable does not look for the son, but relies on God, who is working behind the scenes. The lost son was truly lost, being dead in his sins. When the son asked his father for his portion of the inheritance, he was stating that his father was already dead. He was not behaving in the spirit of his father.

The same is for us who sin against God. Within the Christian community, there are those who may call themselves sons of God, but if they do not behave as sons of God, they are sons only in a nominal sense. The second son also does not behave according to the spirit of his father in welcoming his brother home. He harbors bitterness and hatred toward him. "Anyone who does not do what is right is not a child of God; nor is anyone who does not love his brother;" and "Whoever hates his brother is a murderer, and you know that no murderer has eternal life abiding in him." (1John 3:15) The younger son did not love his father by implying his father was dead and the second son did not love his brother.

Great help, thanks for your blog!

I am currently writing an assignment on the Sacrament of Penance, and this website is super helpful. The hard work put in is much appreciated by my peers and myself.

WOW. I am doing an explosion diagram on penance, and this helped me heaps. Thank you.

Liturgy of the Hours

The Sacrament of Penance & Reconciliation

Our Lady of Lourdes